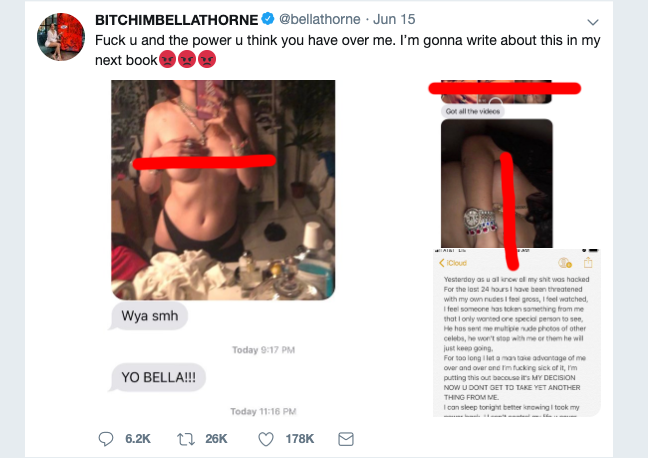 Bella Throne has recently been in a celebrity nude photo hack. Bella said that an anonymous hacker has been sending Bella her own nudes and threatening to share them publicly. Bella handled this situation in a very interesting way – by posting her own nudes on twitter.

The Hacker Said He Has All Her Private Videos

Yesterday, Bella posted screenshots of the conversation she had with the hacker, where he sent her the pictures he had of her bare cleavage and him texting her, “got all the videos.” In that tweet, Bella said “F*ck u and the power u think you have over me. I’m gonna write about this in my next book 😡😡😡”

Yesterday as you all know my sh*t was hacked For the last 24 hours I have been threatened with my own nudes I feel gross, I feel watched, I feel someone has taken something special from me that I only wanted one special person to see, He has sent me multiple nude photos of other celebs, he won’t stop with me or them he will just keep going…I’m putting this out because it’s MY DECISION NOW U DONT GET TO TAKE YET ANOTHER THING FROM ME. I can sleep better tonight knowing I took my power back…Here’s the photos he’s been threatening me with, in other words here’s my boobies. So here f*ck u, and the last 24 hours I have been crying instead of celebrating my book while doing my book press. Oh yea, the fbi will be at your house shortly, so watch. Your. Mother. F*ckin. Back.

We hope Bella catches the hacker, and she did a courageous thing by taking a stand for herself. It’s unfortunate that this keeps happening to women in general, but Bella is dealing with it like a champ.