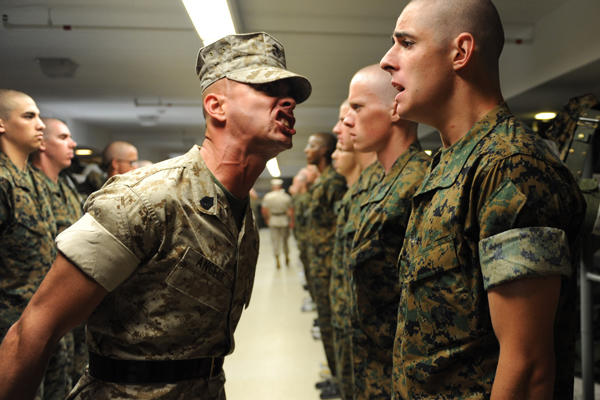 Soldiers of Reddit were once asked what was so funny that even the drill sergeant couldn’t help but giggle, and the answers were hilarious!

“Dude was told he couldn’t trim his unibrow, if he did he’d have to shave both
eyebrows as well.. so that’s what dude did, shaved it all. DS lost it laughing and
then made the private report every morning to have them sharpied on with a new
expression every day
Added: The best ones were when he was given two squares as eyebrows or a
constant surprised look”

“Someone in basic threw their half-eaten schnitzel into the toilet and tried to flush
it. It didn’t flush. He left.
So we are all in our rooms as we here one of our drills scream to get out and line
up.
We line up and he was one of the super-serious guys, 190meters tall, easily 100kg
of pure muscle and always mean mugging everyone.
He starts screaming at us telling us that we are pigs. No one knew what went on.
Then he started yelling “someone threw a f*cking schnitzel into the toilet” as he finished he started smiling. First time in months I saw the dude smile. Everyone started laughing hard. He got angry again and started repeating himself. He starts laughing once he hits the schnitzel part again. We all laugh again.
He just tells us we are dumb asses and someone better fish that piece of schnitzel.”

“From a friend at air assault, they were fast-roping down off towers and there was one guy that was deathly afraid of heights but was still making his way to pass and he was just standing there and the instructor yells something along the lines of stop being a p*ssy and go, he proceeds to jump into the rope, lose his grip and fall the entire way down while screaming “AIR ASSAULT” until he hit the ground.
He broke his arm and had to go with the next class. “

“Drills were searching for contraband after a Private was found with chewing tobacco. One of the DS got a broom handle and started pushing the ceiling tiles up to see if anything would slide out.
A ‘happy sock’ fell out and hit him in the face. The other DS walked off into the office. He was cough-laughing the whole time.
We were smoked into oblivion.”

“Navy boot camp in Orlando Florida in August of 1989. The company was split up in two, on either side of the centerline facing the front of the bay. Our company
commander had us doing 4 count jumping jacks where we all had to clap on the
2nd and 4th together. It had to sound like one clap.
There were 68 of us and even though we struggled, all of us eventually got it. Well,
all of us but one. This poor guy just could not clap with the rest of us. He was eventually pulled up to the front of the bay where he would lead the exercise. At the last second, every time, he would change his pace and ruin it. The company commander smiled throughout and eventually just keeled over laughing at this guy.
It’s funny though that I don’t remember being angry even though we must have been doing jumping jacks for about three hours in 100-degree heat. I do remember that the only reason we quit was that the cement floor was too slippery with sweat to safely continue.”

“OMG, I have the best story for this. In basic training, some dude was getting a
reprimand from the course officer because he was a bag of fail. He got briefed by the platoon Sergeant beforehand to march to the door, salute the officer, and wait to be instructed what to do. But this guy was as dumb as a brick, so he marches to the door, and stands there looking stupid.
The Sergeant waits a good long while hoping this kid will clue in, and nothing happens. Finally, he yells at him “WELL, AREN’T YOU GOING TO PAY
COMPLIMENTS TO THE OFFICER?! And numptie stammers for a bit and finally chirps out, “Um, uh, you’re looking really nice today Sir. The sergeant yells at him to
GTFO, and slams the door and the entire course staff nearly die from laughter. It took an hour for us to stop laughing long enough to call him back and actually give him the reprimand. I was on the floor with tears in my eyes.
For YEARS afterward, anytime we would see that officer we would stop him to tell
him he was looking nice.”

“We are out on the pad standing in formation waiting for breakfast just like any other BMT morning. We are at the end of our training so the MTI’s tend to not harass you as much in your last week or so at basic.
Our MTI has a doctor’s appointment or something so he has a female MTI in the squadron we have seen from time to time watch us while he is gone.
So she takes us all from parade rest to attention and addresses the dorm chief
(lead trainee position in the flight). He let out the fatal response of “Yes Sir! to whatever the f*ck she said to him. She’s a petite athletic-looking redhead and would not be mistaken for a sir. She gets right in his face as it leaves his mouth and starting yelling, “AAAAAAAHHHHH! YOU MAKE ME SO MAD I JUST WANT TO WHIP OUT MY d*ck AND SLAP YOU
ACROSS THE FACE WITH IT! IFFFFFFF I HAAAAAAAAD ONNNNNE! there were 3
other flights with like 20-40 trainees each including their MTI’s immediately dying laughing. Even she only held it together for a few seconds of being angry red in the face before laughing.”

“Our Sargent liked to take his Smoky Bear hat and tap recruits on the bridge of their nose while yelling at them that he wasn’t touching them. I happened to fall in behind him walking down the bay. He thought it would be a good idea to spin around and poke the brim of his hat into somebody’s face. Hit me square in the chest. I’m 6’6” tall. I can’t even remember what he yelled exactly, but he was trying very hard not to laugh, then spun back around and went into his office with the assistant TI. “