Spine-chilling: Nostradamus predicted what will happen in 2020 🤯🧐 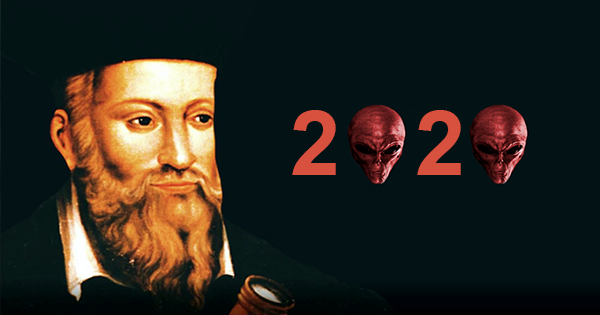 Most of you are familiar with the fact that in the early 16 century the prophet Nostradamus has predicted the rise of Adolf Hitler, the threat of global war and even the end of the world. Here are some Nosterdamuse’s prophecies that refer to the ongoings in 2020.

Nostradamus, or as his real name is Michael de Nostredame was a French astrologer, physician and reputed prophet who is best known for the 942 poetic quatrains that supposedly predict the future.

Nostradamus is known to have heralded the rise of Adolf Hitler in 1933 and the Great Fire of London in 1666. Other than that, he had a lot of additional prophecies in his book ”Les Prophéties”, which has rarely been out of print since his death in 1566.

What did Nostradamus predict for the year 2020?

Many believe that the prophet had predicted the outbreak of World War III and that it may finally take place in 2020. This suspicion grew as the USA president Donald Trump ordered a missile strike on Iran’s Major General Qassem Soleimani on January 3rd. Iran countered a few days later when struck the US military bases in Iraq with several rocket attacks. As the tension between the East and the West grew, Nostradamus’ predictions ”Twice put up and twice cast down, the East will also weaken the West”, and “Its adversary after several battles chased by sea will fail at the time of need.” were coming true.

It is believed that Nostradamus had directly addressed US President Donald Trump in his Century 1, Quatrain 40:

”The false trumpet concealing madness will cause Byzantium to change its laws”, ”From Egypt, there will go forth a man who wants, the edict was withdrawn, changing money and standards”

In 2018 Hamilton-Parker prognosticated President Trump will face an attempt on his life as well as a second term in office. Recently, a man was arrested at the White House after planning to assassinate the US President.

Has Nostradsmus already warned us about the coronavirus?

Nostradamus enthusiasts deeply believe that he predicted the coronavirus. In his book ”Les Prophéties” Nostradamus did write ”The great plague of the maritime city. Will not cease until there be avenged the death. Of the just blood, condemned for a price without crime.” We can all agree on the fact that Wuhan is not a ”maritime city” but the rest of the prophecy does match wit the coronavirus situation: the disease was traced to a seafood market, which a lot of people consider enough of a proof.

Also, social networks have been flooded with tweets about how Nostradamus described the spread of plague in Italy that will be the end of the global economy as we know it. The prophecy people refer to is:

”There will be a twin year (2020) from which will arise a queen (corona) who will come from the east (China) and who will spread a plague (virus) in the darkness of night, on a country with 7 hills (Italy) and will transform the twilight of men into dust (death), to destroy and ruin the world. It will be the end of the world economy as you know it.”

The question is are all Nostradamus’ predictions to be trusted

As we already mentioned, Nostradamus predicted many ‘events’ that took place on our Earth. He also alerted us about the assassination of President John F Kennedy, and many believe that he warned us about the coronavirus nearly 500 years ago, when said that people will cry for help to God because of the famine within plague.

Some are skeptical about Michael de Nostredame seeings, while some have full faith in them, but so far he hasn’t let us down. It’s up to you will you believe what this influential man predicted will come true or not, was he really psychic or not. But whatever you choose to believe in, don’t forget this reliable information about his prophecies.