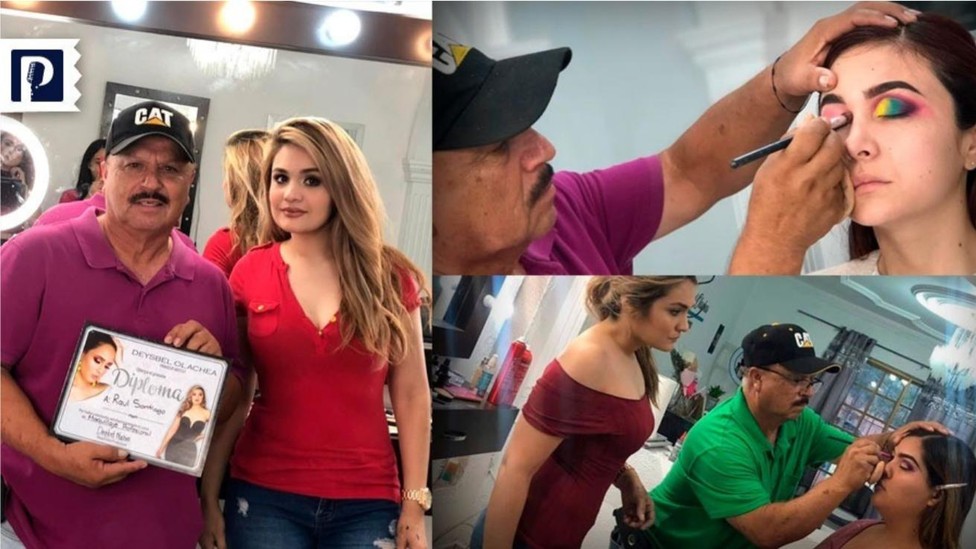 Don Raúl Santiago is not afraid of challenges. A 60-year-old truck driver quit his job and became a makeup artist.
Take a look at how it all started and what happened afterward.

“I’m getting out of the truck to do makeup.”

“Me voy a bajar del tráiler para maquillar” (I’m getting out of the truck to do makeup), says Raúl Santiago, father and grandfather, who completely changed his profession. He started following the work of Deysbel Olachea, Sonoran makeup artist who offers her own course in professional makeup artistry. He decided to take her course because he knew it would mean a lot in making his own makeup business. Raúl learned how to sell every product and how to use it.

His First Days At The Course

After calling Deysbel to find out the dates of her next course, he took off to Sonora, Mexico to join the class. Deysbel and her all-female class were surprised when Don Raúl showed up with his mustache and his trucker hat. “I thought he was going to be younger,” says Deysbel, who had never had a male student before, let alone a truck driver. The first day, Raúl was too nervous to touch any of the models, worried he would hurt them with his large, rough hands. But, by the third day, he was bragging about his blending skills.
On the last day of the course, Raúl brought fruit and Aguas Frescas for the class – and, a hustler that he is, the case of cosmetics he sells.

But It All Started A Long Time Ago

Ten years ago, Raúl, who has three daughters and lives in Arizona, started selling makeup to cashiers in the restaurants and stores along his routes to make a little extra cash.

“Whenever I pass a place, I know I can convince the girls to buy makeup,” says Raúl. “I’ll compliment her eyebrows,” he says, and eventually offer a few “cremitas.” “Within five minutes of chatting, they’ve bought something.” Charming, right?

Deysbel says that she’s received many messages from prospective male students who said they wouldn’t have considered taking the course before because “they’re men, because of their age, because they’re married…but now they say that if he can do it, so can they.”

Raúl, who plans to pursue makeup full-time now, has received many messages of support, and even requests from Ford and as far as Colombia to speak about his experience. But one message, in particular, got to him, from a man who confided that he’d been thinking about trying his hand at makeup for a long time, “pero como es hombre…”
So Raúl replied: “I told him to get to work. We live in this society, not for it. I’m not afraid of being stereotyped, I live without prejudices. I respect people because of who they are and because of their work; if you do something well, keep doing it.”